The Official Message Board of JasonIsaacsOnline.com!

This BBC/BBC America miniseries, filmed in Toronto, was broadcast on 2 November 2006 on BBC1 in the UK, and in the US in February 2007.

Now this can explain why the region 1 DVD is coming out on Feb 27th.
Maybe it's better to watch it 2.5 hrs at a time, it's too complicated and only die-hard fans will stick around for 10 episodes otherwise??

Jason goofing around from 'The Making of..' in the DVD 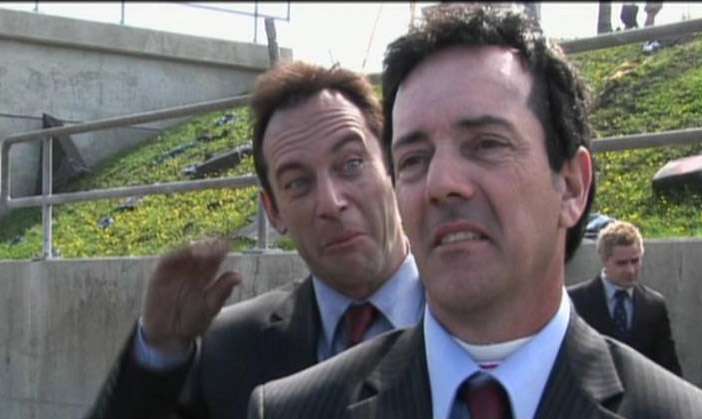 So who's the unsuspecting victim? He's dressed like JI so I'm assuming a stand-in?

Funny pic, Char. Thanks for posting it.
Top

I think it's the set Director (sorry I didn't pay any attention to anyone else except when Jase was talking). He was supervising the planecrash scene.
Top

.... it is the stunt guy...he's there cause they didnt know how much of the stunts Mr Jason would do, and there is also a stunt guy for Ben Daniels, he's also there in the back ground, to the right. I dont think he looks anything like Ben, but, Oh well....this guy claimed that Jason was going to do his stunts, even the close up stuff...that's why Jason jokes around and tells everyone "If I get hurt, everyone can help me"....looks like he's having a blast filming this series...he seems to joke around alot...great sense of humor.
This stunt guy was worried that Jason was doing so much of his own stunts, that he wouldnt get a chance to do anything...LOL. Thats when Jason came along and was kinda mocking him in the back ground, like
"whose this guy? and yada yada yada"...LOL
Kim

it is the stunt guy

Ah, thanks Kim--I was wondering about the funky t-shirt job, but if he's a stuntman, maybe it's...I dunno, padded or flame-retardant or something.

And thanks the rest o' yez for sharing--I really need to get my bum (wallet) in gear and order this!!!
Top

You're welcome Hil, I was wondering about the white shirt under there, too, but I think it's like you said, maybe some kind of padding or flame retardent stuff....The DVDs I have are Region 2 (UK)....
The US DVD's are not available until the end of February..
How do I watch Region 2 DVD's? I have a Region Free DVD Player...
It's awesome!!! I think I payed about $40 bucks for the UK DVD's...
Kim
Top
Post Reply
6 posts • Page 1 of 1

Return to “The State Within”