The Official Message Board of JasonIsaacsOnline.com!

Craig J. Harris sent a message and a photo

This pilot for a Fox television series, based on the novel by Scott Turow, was tragically not selected for production. Bastards.

Craig J. Harris sent a message and a photo

I played Terrence Carrothers on Guilty” and had the pleasure of working scenes with Jason for several days. I only just learned of your Jason Isaacs Fan Forum (I've also traded FB messages with Angel Tavington from your forum) and I have to say that the dedication displayed by everyone on that forum to all things Jason is commendable. If only you guys could have been Fox Network Executives ;)

There are many reasons why a show doesn’t get ordered to series (Heck, even getting “ordered to pilot” is a small miracle.) I can tell you that PG was conceived, produced, written and acted extremely well, however; there were other shows competing for a slot on the network that were equally well crafted. Shawn Ryan’s Ride-Along starring Jennifer Beals, which was picked up by FOX and that I had the privilege of visiting the set looks like a PHENOMENAL show. I don’t think PG wasn’t picked up because it wasn’t a great show, but rather because there aren’t enough time slots of programming in a week at FOX. I know I might be biased, but speaking as a screenwriter and an actor, PG is a really great show. Jason is a wonderfully talented actor and will always have work.

Even though the PG dream appears to be over, I hope you guys continue to keep the faith over there. Below is a photo of Jason and I goofing on the set 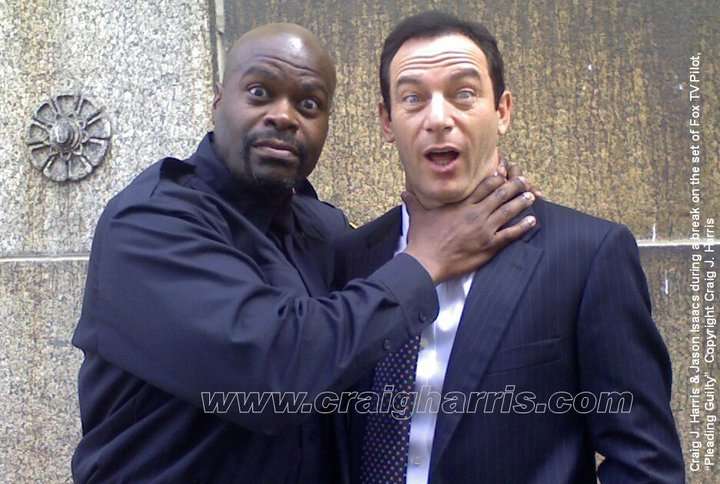 The story behind the photo is that my Mom really hates all the bad guys he plays and we thought it would be in good fun to do a photo whereby her dutiful son "chokes" the evil Tavington.

Jason is very serious about his craft, but also down to earth and very playful. We had one scene where he was trying to convince me to help him by appealing to my characters sense of fairness and would routinely end the take by jumping on my back, or speaking gibberish.

Additionally, we both share an appreciation for boxing and MMA and discussed it a lot between takes on the set. It was really great working with Jason.

Feel free to ask me anything about my PG experience and thanks for the well wishes.

Craig gave permission to share the message and the photo. He had been reading our MB.
He was kind to be willing to answer any of our questions.

Fire away..I will send them to him or if he visits here he may answer them himself.

THANK YOU! CRAIG
We really appreciate this and GOOD LUCK TO YOU!

Wow! Thank you, Char, and thank you, Craig for sharing with us. The pic is priceless, and, yes-we will continue to keep the faith-always. And Craig, please visit us here whenever you can!

Thank you, Craig. We love any anecdotes about Jason on set and off.
Top

thanx Craig, we appreciate your kindness and willingness to share!!
Top

The story behind the photo is that my Mom really hates all the bad guys he plays and we thought it would be in good fun to do a photo whereby her dutiful son "chokes" the evil Tavington.

Ah, so that's the story behind the picture LOL! Poor Tavvy!!!

Thank you Craig, it's a pleasure talking to you!!!

Thank you Craig for the photo and all the nice things you said about the pilot.
We are disappointed it was not picked up but there will be many more performances in Jason's future for us to look forward to.
Top

Wow, how amazingly nice of Craig to share this with us! As fans, we really are blessed!
Top

That's a funny picture. It was very kind of him to share his experience and picture

Gosh, that was so kind! Mr. Harris, we'll keep an eye out for your next project as well! Thanks for sharing that delightful image--we knew that Jason can be good fun, but I had no idea he enjoyed boxing. I guess it shouldn't really surprise me, given his demonstrated enthusiasm for, well, just about every other sport!
Top

Thanks, Craig, so much!!! Is there a possiblity that the show can be picked up by another network? Could the pilot be shown on the internet? What else have you been on? I'll definitely keep my eye out for you!

Thanks again for the fab pic!!

I just checked your website! You were in The Unborn with Gary Oldman? Did you have any scenes together? What was it like working with him?
Top

How cool! Thanks to Mr. Harris!
Top

yeah it was kind of him to send a message! He seems to be such a cool person...

Thank you for your input and your support of our mb forum, Craig.
Keep us updated. Our fingers are still crossed. *bitingmylowerlip*

You're a class act, Mr. Harris!! We'll definitely be keeping an eye out for your projects!